It’s a loving tribute, but THAT ring ensures Kate can never be free of the spectre of William’s mother 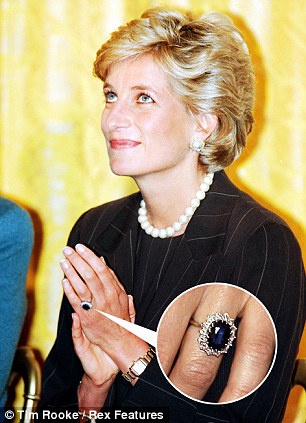 Memory: Diana’s ring has a fond meaning for William, but some see it as a tragic symbol

For years they tried to airbrush her out of history.

After all, wasn’t she the troubled woman whose reckless behaviour and ­deliberate ­revelations about the ­awfulness of life with the royals ­threatened the very ­stability of the monarchy?

And yet Princess Diana is back. Indeed she is everywhere, the ­symbol of her existence flashing on Kate Middleton’s ring finger. Kate even wore a blue dress — just as Diana did — to match the large ­sapphire and diamond engagement ring she has inherited from the Princess.

The dangers are obvious, even though it is clearly William himself who is pushing his mother’s image to centre stage. As he said ­yesterday, the ring is ‘my way of making sure my mother didn’t miss out on today’.

This is a warm and loving tribute to his mother. But is it wise?

Consider this: when Princess Diana walked up the aisle at St Paul’s Cathedral on the arm of her frail father Earl Spencer on July 29, 1981, she scoured the seats in search of the ghost who haunted her ­wedding — and found her. Her eyes locked on to Mrs Camilla Parker Bowles sitting with her small son Tom in the sixth row.

But won’t Diana herself be the ghostly presence when Kate walks up the aisle on the arm of her father Michael Middleton next spring?

Comparisons with Diana will abound. The dress, the crowds, the hymns and, especially, the bride. That fabulous ring of a sapphire ­surrounded by 14 diamonds cost £28,000 at the time and was copied by jewellers all over the globe. It was then, and remains now, a ­symbol of Diana’s entry into the Royal Family.

At the same time, it is a constant reminder of her unhappy marriage to Prince Charles, and of its ­ultimate failure. Omens are important at ­weddings. Something old, ­something new, something ­borrowed and so on. Women are sensitive to these ­traditions and it’s no surprise ­millions were surprised — even shocked — to see that ring on Kate’s finger.

William, of course, obviously feels intimately close to the ring, which he and Harry agreed should be used by whichever of them was the first to become engaged. His admiration for his mother is obvious. 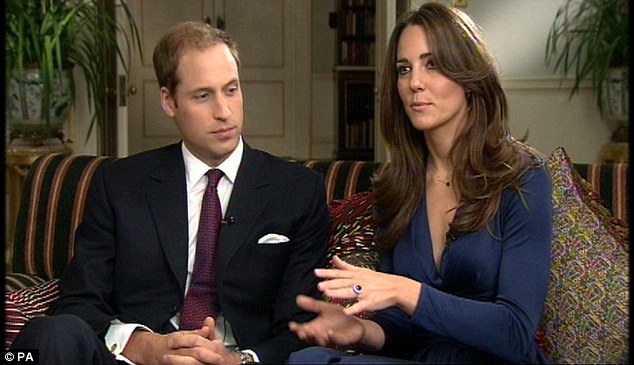 Is it wise? Prince William is pushing his mother’s image with the choice of ring, and the colour of Kate Middleton’s dress

But surely his engagement to Kate should have signalled a completely fresh start for the royal story, not one that ­guarantees permanent ­flashbacks to the years of rows and misery that this ring represents?

More than a decade after her death, who would have thought that the royals would have had to get used to living with Diana all over again? After all, they tried hard enough after 1997 to eradicate her memory from the public consciousness.

It took seven long years before a memorial to Diana was created (although it must be said, it was the Queen who declared it open). But what was it? Not some grand and imposing memorial to a ‘great’ lady, but a troublesome concrete stream with endless teething ­problems. 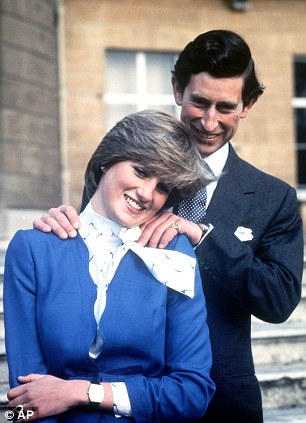 Echoes: Kate’s blue dress chimed with the one Diana wore to announce her engagement

Nor were there any ­penetrating royal voices raised in an effort to persuade Charles ­Spencer not to take his sister back to the family home of Althorp, in Northamptonshire, where she is ­buried on an island unreachable by the house’s thousands of visitors.

It remains very strange indeed that the public who loved Diana have no access to her resting place.

Among the public, then, Diana’s memory has been slowly fading for years. Until Tuesday’s engagement.

Just imagine the glowing warmth and closeness William felt for his late mother as he determinedly carried her engagement ring in his rucksack across Africa for three weeks before popping the question to Kate and slipping it on her finger in Kenya.

Yet had William and Kate chosen their own ring, Diana’s presence at the happy event would have been welcome, but minimal and fleeting. Instead, from this moment, there can only be constant memories and ­references to her.

People have a conditioned reflex to that ring. With respect to the ­delightful Kate, it is — it will always be — Diana’s. And so, whenever Kate changes her hair, or is seen in a new dress, puts on weight or loses it, or helps the homeless and becomes the patron of this or that other charity, there will be instant comparisons with Diana.

How much less stressful all the attention on Kate would have been for her, if only the royals had ­considered with more depth and ­clarity the ­implications of intro­ducing Diana into the proceedings.

It is telling that Kate’s composed performance during the lengthy ­television interview stumbled only once — when William’s mother was mentioned. 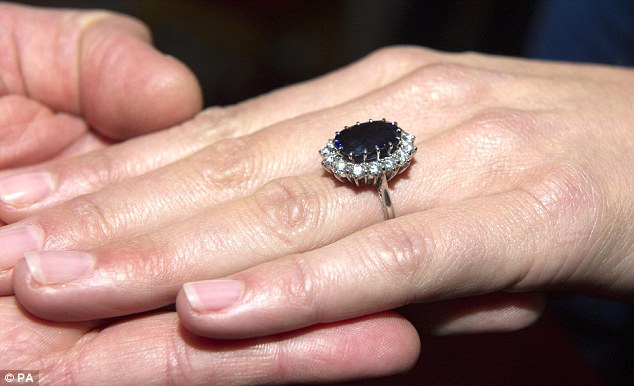 The Prince, an assured performer, murmured there was ‘no pressure’ on his fiancée to step into his mother’s shoes. But how curious that Kate should describe her new role as ‘daunting’ — the very word the then Lady Diana Spencer used 30 years earlier.

For her part, Kate, asked whether she found the Princess of Wales’s ­legacy intimidating, lost her ­composure as she replied that she would have ‘loved to have met her’, and that she was ‘obviously an ­inspirational woman to look up to’.

Doesn’t that very word ‘inspirational’ invite comparison? Of course she was much more composed for her engagement interview than Diana had been for hers, but then she is 28 and Diana was only 19 for the same event in February 1981.

But the permanent presence of the ring has implications for another senior royal woman — Camilla. To the Duchess of ­Cornwall the ring, as a symbol of marital fidelity, invites dangerous ­recollections of Diana pleading with her to leave her husband alone.

After all, but for Camilla, that ring would not have the unhappy ­associations it now bears.

To find THE Ring that truly fits your personality: visit http://www.LaceMeWithJewels.com