My Biz Partner Cut a Record 50 Years ago and I Just Heard it!

Learning the Life Story of a friend or family member can be astoundingly rewarding. Please read my colleague, Chuck Benjamin’s blog about mybusiness partner, Debby Bitticks – who cut a record 50 years ago and we all just got the opportunity to hear it for the very first time!  Enjoy the benefits of organizing your life and getting your life story!  xo Dorothy

It’s 1961 and 16-year-old California native Debby Sharron is about to realize her dream.  Blessed with a wonderful voice, she will soon be entering a recording studio to sing two songs that will comprise her very first 45 rpm record. Debby’s father, a Rabbi, is not as enthused about the upcoming event.  When he discovers the date falls on a religious holiday, he forbids Debby from attending the recording session.

in Hollywood. Crying all the way and visibly upset by the time she arrives, Debby has to fight back the tears, compose herself and sing her songs.  The producer for this session is Shel Talmy, a young man who had worked at the studio for just three days prior to this session.  The “A” side was “Falling Star” and the “B” side was “Cruel Way To Be” which was actually written by the young Mr. Talmy.  Within six months, Shel Talmy would go to England and try his luck producing British artists. Debby is pleased with the songs and hopes that when her parents hear how well she can sing, they will allow her to pursue her dream of being a singing star.

As often happened back then, religious beliefs and traditional family values triumphed over dreams.  Debby’s father forbade her from being a singing star.  His plan was for her to marry young and start a family.  Her songs could be found on Bamboo records #516.  It was her first and last recording session.  Per her family’s plan, she was married shortly after graduating from High School and in six short years was the mother of four.  She stopped singing and lost that precious 45 on the Bamboo label.  Ironically, while on her honeymoon, she heard “Falling Star” on a jukebox.  She discovered that sheet music had been released and the song was doing very well in Philadelphia.  There are simply not enough adjectives to describe Debby’s despair.

Chicago native Shel Talmy on the other hand, achieved his production goals “across the pond” beyond his wildest dreams.  You may think you’ve never heard of Shel, but you probably purchased MANY of the records he produced while in England.  Here are some classics he produced for the Kinks and the Who:

Shel also worked with the Bachelors, Chad & Jeremy, Manfred Mann, the Fortunes and Davy Jones & the Mannish boys, whose lead singer pursued a solo career using the name David Bowie.   In 2003 a tribute to Shel Talmy was aired on the radio program Little Steven’s Underground Garage.  Shel currently resides in the Los Angeles area and still does production work.  You can find him at http://www.sheltalmy.com/

Debby eventually forgave her father and went on to become a very successful business woman.  Her teenage marriage ended in divorce, but she is now remarried to Ken Bitticks with the added bonus of three additional children.  Debby doesn’t remember exactly when she lost her 45, but that loss would come back to haunt her.  In 2001, Debby’s father became ill and she decided to provide care for him at her home.  It was during the care giving years that followed  with the help of one her daughters, Lynn Benson, Debby created “the BioBinder” which would lead to her life’s work. The intent was to capture the 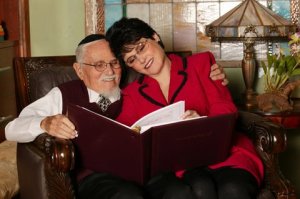 memories of her father’s life so future generations could know him.  She learned about his teenage years in Germany and escaping from the Nazi’s and coming to America.  She began to understand his decision to become a Rabbi and his deep beliefs.  In turn, her father (who was also blessed with an excellent singing voice) came to realize the importance of Debby’s music.  He passed away in 2005 at the age of 89 in her home with his entire family around him.  Life had now come full circle except for one thing.  Her husband, children grandchildren and even her younger sister had never heard her songs.  She had wanted desperately for her father to hear those songs before he died, but at the time, the songs were nowhere to be found.

We now flash forward to 2011 and how I got involved in this unique quest. Debby looked up Shel on the Internet and contacted him.  He said it was the longest time between clients he had ever experienced.  She had hoped he could supply her with her songs, but Shel doesn’t own the 45 either, and the only tape he had from the session had key instrumentation missing.  A unique bond must have been formed 50 years ago, as Shel became a man on a mission to help her find her lost songs.  He enlisted the support of good friend Mike Todd, perhaps as computer knowledgeable as anyone Shel had ever met.  He charged Mike with finding the elusive missing 45.

Mike Todd is the founder of the Internet Society, Los Angeles Chapter.  His background includes projects with industry giants Bill Gates and Peter Norton.  Mike must have been amazed when his search was met with an immediate hit.  It took him to a database of songs we have played on our

“specialty shows” at songsyoushouldhaveheard.com.  My good friend and co-host on TUNEDEX MEMORIES, Frank Kramer played BOTH SIDES of the 45 on two different shows back in 2006.  After I got the email from Mike, I called him and explained that Frank had sold the record, but we could send .mp3′s immediately and I would make CD’s for both Debby and Shel.  Within 10 minutes, Shel called me to thank me for helping and how important it would be to Debby just to hear her songs again. I was very impressed with the compassion I felt from this highly successful man for the crushed young girl whose project he produced back in 1961.

I sent the .mp3′s to Debby and Mike (who forwarded them to Shel). I soon

got a call from Ken Bitticks who confirmed that they had received them.  A very emotional Debby then got on the line and thanked me profusely and I began to understood how important it was for her to hear these songs again.  Ironically, Debby had no idea that Shel Talmy had written “Cruel Way To Be”.  Ah technology! who could have believed that an email with .mp3 files could produce such joy! I promised her (as I had told Shel) that we would look for the record and get back to her if we found one.  As luck would have it, the same day, Frank found a copy of the record from a  dealer located within 15 minutes of my house.  It was advertised as not in the best of shape, but Frank bought it and waited

patiently.    While Shel would love to have a copy also, it was unanimously decided that Debby would benefit the most from owning her long lost record.  I assured Shel that Frank and I would continue to look for a copy for him also.

I prepared a package of CD’s for Debby (which included extra copies for her kids so they could listen to their mom singing whenever they were near a CD player.  I made a CD for Shel and the very next day, Frank sent the long lost 45 to Debby.

Debby called Frank to thank him for the record and he could sense in her
voice how important it was to have this record once again in her possession.  Debby’s daughters are thrilled and her grandchildren think it’s awesome that their “Grandma Debby” was a really cool teenager with a rockin’ voice.  Two of her grandsons already have loaded the songs on their IPODS and sing the songs on the way to school.  The joy is spreading throughout her family and  friends because everyone loves the songs.  You can hear Debby’s songs on TUNEDEX MEMORIES at http://songsyoushouldhaveheard.com

Debby’s grandchildren always tease her because she likes movies with happy
endings – so they call them “Debby Endings”.  This is the PERFECT
DEBBY ENDING!

If you have a relative who is in extended care and would like to know more about the “BioBinder” you can read about it at Debby Sharron Bittick’s website http://www.delphihealthproducts.com/

If you have a spare copy of Bamboo 516, you can make Shel Talmy a happy man.  Send me an email to chuck@songsyoushouldhaveheard.com

P.S.  I’m happy to report that Debby and Shel got together for dinner recently and spent some time reminiscing about the recording session, the lost 45 and catching up after FIFTY years!